Trick or Treat "Thank You" Monsters

This Halloween was definitely one to remember! Arielle looked so beautiful and grown-up as TiNkErBeLL and she truly enjoyed everything that this holiday has to offer! I have never been one to enjoy Halloween myself, thus I do not decorate or bake goodies and such so when she woke up and I told her it was Halloween I felt terrible when she asked me, "How come we don't have any decorations?" Note to self: Buy Halloween decorations for next year. 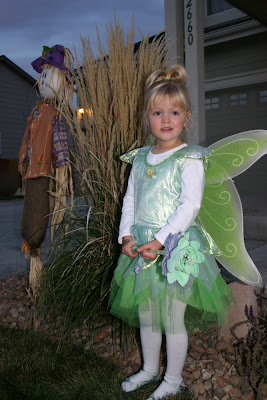 As we set out for trick or treating through our NeIgHbOrHoOd we met up with another little girl that was a little older than Arielle. Her name is Evelyn and she lives across the strett from us! The two of them joined forces and had such a fun time going from house to house each trying to beat one another to the doorbell and to the next house. I don't think either one of them forgot to say "THANK YOU" for the entire night, nor did they fail to tell us {their mom's and grandma's} that they remembered to say it! In fact, I think the entire neighborhood probably heard everything they said the whole night that is how loud and proud they were! At one point someone told them that they were little Thank You Monsters so Arielle decided to add Monster to the end of every Thank You. It was really cute!

We made it up and down every stretch of our our neighborhood and Arielle's pumpkin was filled to the brim with treats! After Zak examined every piece, she immediately poured it all out on the floor to see what she could find. We let her have a couple of pieces before bed and a few pieces after meals this weekend but she hasn't really been hounding us to eat that much candy which surprises me. 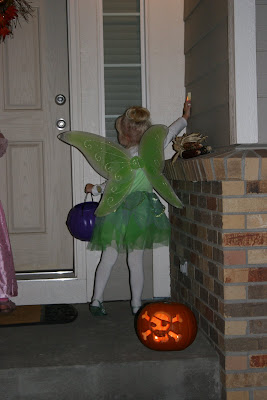 What I will remember the most about this Halloween is Arielle's reactions to the SpOOkY masks and decorations that we encountered. First, there was a kid with a white "Jason" mask on and he was wearing all black. The second he turned around as the girls were walking up to the house he was leaving, they ScReAmEd and RaN back to us and who can blame them, really? Then there was a person handing out candy in a similar costume that didn't talk and they had haunted house sounds playing on their porch. Arielle was hesitant to approach this house and even though I walked up hand-in-hand with her she turned and ran back to Zak as we got close to the person. Evelyn braved it though as she took the candy then ran! As scared as Arielle was as I was walking back to her {with candy in hand} she asked, "Mom, can you get me a piece of candy from them?" There were a few more scary masks along the way that sent the girls screaming back to us but then there was the last house of the night. It was a house on our street and they had a Halloween arch over their doorway that played HaUnTeD HoUsE SoUnDs the second that you walked through it. Arielle did not like that whatsoever but we talked her into going up the door with us. I thought for sure she was going to have nightmares that night and wake up screaming or crying. Thankfully that did not happen! 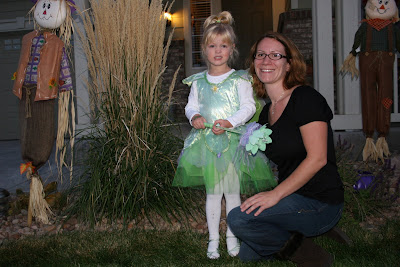 she looks like the perfect tink, des! what a cutie!!

She looked super cute! I really like her hair like that!
Did you guys buy the Tinkerbell movie? We did. Imani watched it yesterday morning. She liked it alot!

Your little girl looked SO cute! It is fun to meet you, I love to hear about all the other Colorado mamas out there! :)
Carrie