I started to write this post four days ago and was very happy about the title because it described what Arielle had been acting for the past week. However, she is four and her mood changes in the blink of an eye. Suddenly she has been acting more like a two year old. To put it eloquently, she has had a few number two accidents out of the blue and I don't know what to make of it. She didn't even have those types of accidents when she was potty training believe it or not. If she is trying to get my attention it sure is working. This must be a glimpse of things to come when the baby is born and Arielle is getting even less attention. 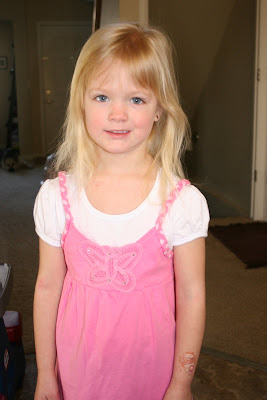 Let's rewind to last week when she announced to me that when she was grown up she was going to get married and have babies. She went on and on about how she was going to have babies so that she could take care of them and feed them. I later found out that she told her teacher the same thing. I know the fact that I am pregnant probably has a lot to do with her recent decision making but I can't help but think she is WAY too young to be planning this out right now. Then today out of nowhere she came up to me and tried to "french kiss" me, not once but twice. She was not happy when I told her that kissing that way was inappropriate. She seems to be in such a hurry to grow up, it is almost saddening but at the same time it is refreshing to be reminded of her pure childhood innocence. She is just telling it like she sees it.

On another much greener note, we had to dig up our front yard tree that was not coming back to life. The tree that we got to replace it is beautiful! It's called a Ft. McNair Horse Chestnut and has beautiful pink flowers in the spring. Although it is a slow growing tree, it gets very tall and top heavy. I hope we can be here long enough to see it get that big. 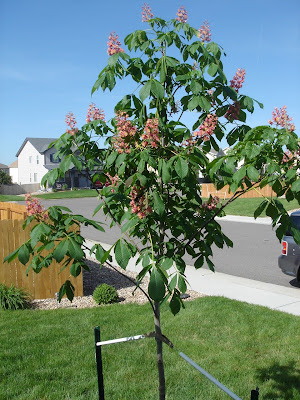 It's ironic that when we're young we try to grow up quickly and when we're older we try to stop the aging process. My daughter is only 2 1/2 and she acts much older than her years. It makes me laugh sometimes.

My kids did the same thing with potty training when I was pregnant with the next one. She might even regress for a bit after the new baby is born. You're right, it's just her way to get your attention. It worked well, don't ya think? :-)

I'm sorry you are having to go through attention thing. I don't have #2 yet, but have many friends who's children have done the same thing.

Any idea's on what you want to do in the new nursery? Please let me know if you want some help coming up with stuff. Nurseries are my favorite room to decorate.

I will have after pics of the nursery posted sometime next week. There won't be before pics b/c we are starting with a blank slate.

Yuck! Sorry you are having to deal with some two-year-old behavior! But on the bright side, your tree is beautiful!
Carrie

Oh the joys of parenting! :) It's ironic that you say that about the french kissing b/c Imani did something along the same lines as that today. She just did it to my cheek, but was like making sounds & I said what are you doing and she said "french kissing". When I first asked her to repeat what she said she got all embarassed. I asked her where she heard of that & she said a friend of hers told her she saw it in a movie. :(
Between that & teaching "human growth & development" to 5th graders this week, I'm getting gray hair!