Last Friday Averi turned half a year old! She started the week off with {another} cold but despite that she has been so happy. She also appeared to be cutting a tooth because she kept sticking her toungue out to feel her gums all day but so far nothing has popped through. 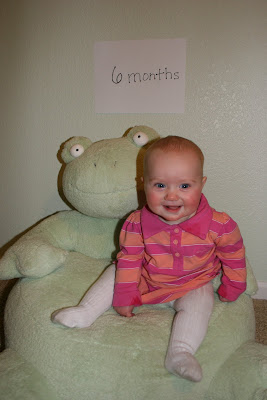 Averi has started following the same schedule every day for about the past month and things are getting easier for us as far as adjusting to life with a new baby. The only bump in the road has been her night waking which always gets worse when she is sick. I decided that something needs to be done to get her to sleep through the night now that she is six months old. So for the past week, when she wakes up at 1:30 am every morning like a little alarm clock, I have not fed her. Of course she cries but she doesn't act hungry so I don't feel too bad about my decision. Her crying increments have decreased from 1.5 hours to 40 minutes in the past week...that is progress even if it is still a long period of time. The crazy thing is that she has been so good at falling asleep on her own for the past several months so I don't understand why she cries when she wakes up in the middle of the night. I think it might be a habit for her since just until a week ago I was still feeding her through the night and she may be wanting to be close to me since I work and we are apart during the day. Averi is very good at taking 2-3 naps a day as well. Overall she is a really good sleeper.
Another big accomplishment that Averi has made since she turned six months old is sitting up, quite well, on her own. She still falls over from time to time but at least she has gotten the hang up sitting straight up instead of her back leaning completely horizontally like she was doing before. 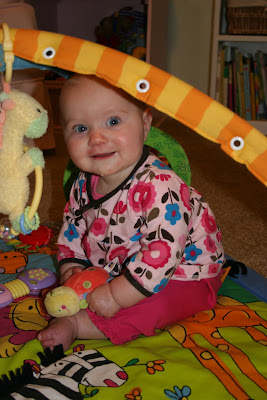 The best milestone so far has to be her first words! She says Mama & Dada often now and seems very proud of herself when she does. I swear she has been saying Mama when she cries since she was about two months old. Dada is a new one though and she definitely says it more often than Mama.
Things Averi enjoys doing to pass the time are the Jumparoo, sitting in her high chair playing with toys and eating of course, bath time with lots of kicking and nursing! She hasn't met a food she hasn't like yet...she gobbles it all up as fast as she can. Things she has eaten so far are green beans, applesauce, pears, sweet potatoes, squash and bananas. This next week she'll try peas, carrots and peaches. We have been giving her a sippy cup with water at mealtimes too. A funny {but annoying for me} thing that she does when she is eating is tries to suck on the bib. As of yet I haven't been able to feed her a complete meal with a bib on because it distracts her from eating. 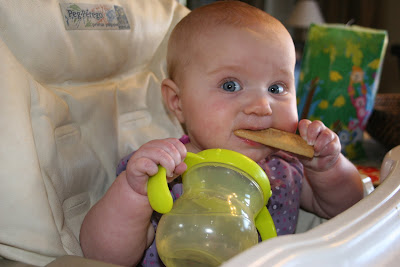 So far we have yet to witness Averi rolling from her belly to her back. Arielle said she saw her do it one time in the crib but there has been no sign that she has done this any other time. Averi still gets a little aggrevated with playtime on her tummy but she is getting more and more used to it. I have a feeling that once she starts being able to roll from her belly to her back she will stop the night waking for good. She is doing a very good job at "standing" and has tremendous leg strength although there has been no sign of her starting to crawl or even scoot. I'm really not in a rush for this to happen anyway because we still need to baby-proof two sets of steps. 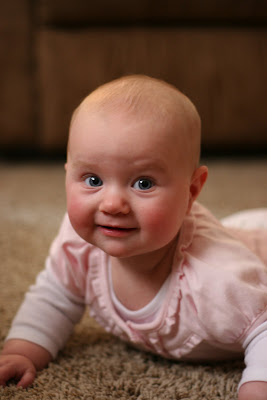 Way to go, Bear! We are all looking forward to what the next six months will bring!

beans did not sleep through the night until 9mos. yikes!

She is so cute! I hope your nights get better. It is so hard to have to let them cry.

that last pic is off the charts cute!