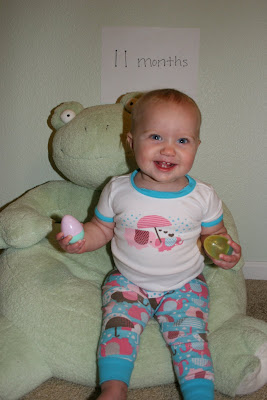 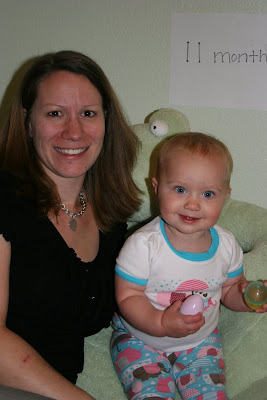 Here are some updates:

-Her scooting turned into actual CRAWLING on her hands and knees on the day she turned 11 months old and she is getting quicker as the days go by!  We installed a gate on the main level that blocks her from the basement and upper level stairs.  We still need to install one upstairs but for now we just constantly watch her when we are up there.

-She is still drinking about 22 ounces of formula a day (2 bottles and 2 sippy cups).  She doesn't like to finish her sippy cups at home for some reason but I'm told that at school she drinks it all up!  She is starting to drink small amounts from an open cup at school as well and doing a very good job of it.  The ladies at school even took a picture of her doing it for me.

-Averi is still eating practically everything in sight but now she is doing some funny stuff when she eats!  She likes to sort out her food, especially if I mix veggies with it.  She'll pick them up one by one and put them in her cupholder or drop them on the floor.  She'll eventually eat them (if she hasn't thrown them on the floor) if they are the only thing left on her plate.  She really doesn't like it when I try to feed her because she wants to do it herself but sometimes she'll let me feed her yogurt.

-Bedtime is still between 7-7:30.  She is now sleeping with a receiving blanket AND her froggy stuffed blanket.  She gets a 6 ounce bottle at bedtime and doesn't cry at all when I put her down if she is tired.  I'm going to cut that bottle out when she starts drinking real milk and there will be no more bottles for Averi.  She almost always wakes up at 6 am and talks to herself in her crib until I get her out at 6:15.

-She is wearing 18 to 24 month clothes but since she started crawling in the past week she has started noticeably slimming down.  She no longer has "knee rolls" and her "back rolls" are starting to dissapear also.

-She is starting to try to pull herself up onto things but is not very steady at all and always has one of her feet turned sideways when she is standing.

-Averi loves holding stuff in her hands, especially bouncy balls and plastic eggs!  She is very good at playing ball too.  Some other things she loves are splashing in the bath (a lot), playing peek-a-boo, swinging on the playground, chasing the dogs, BITING (trying to nip this one in the bud but she thinks it's hilarious when she bites and I say "no"), kissing with her mouth wide open which usually turns into biting.

-Averi doesn't like having stuff taken away from her at all!  Or waiting for her food while she sits in her high chair.  These two things make her cry...a lot.  She also gets pretty fussy when she is tired at which point she tosses her head back and if she is sitting on the floor she'll bring her forehead to the ground and cry.

-Funniest thing she does is say "DOG DOG" whenever she hears someone calling for the dogs (which means she knows their names) or when she sees one of them.  She isn't really saying any other words at this point other than Mama, Dada and Ball.  I thought for a while she was saying Sister but I'm not certain of it now.  She sure does like to babble a lot though especially in the car! 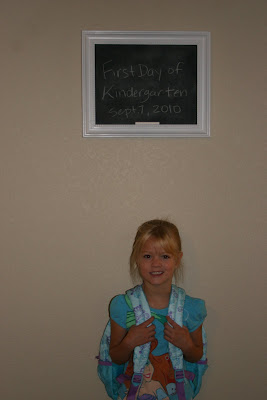 -She hurt her big toe the first day of school, on the second day she fell on the rocks and got a big bruise on her thigh and a cut on her elbow and on the third day she bumped her head and got a big bump and bruise.  Other than that things are going well and she is really enjoying it!  Tonight she did her first "Grouch" homework page.
-Arielle has been writing her own stories lately and she LOVES to read books.  We have been going to the new library down the road so she can get a variety of books to read.
-Her "boy" friend Levi from Pre-K didn't move up to Kindergarten but she still gets to see him when they are playing outside.  I wonder how long it will be before she gets a new crush in the Kindergarten class! 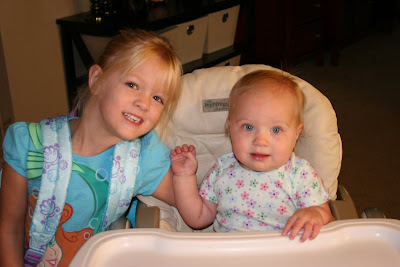 Time seems to be flying by soooo fast...
~Desiree~
Posted by Desiree at 8:20 PM

Isn't it nice to have a blog so that you can remember all of this stuff. Henry's baby book is empty.

The last pic of them together is precious.

Yes time flys by soooo fast my babies our 29 and 25 both married and 1 moved away to florida, you always think of them as babies. Keep taking pictures and keeping a blog of your family the most important thing in our lives. God is good, Kat