Halloween's Past: Day One

In the spirit of HaLLoWeeN I thought I would put together a post of each of Arielle's past costumes, one for each day before the next celebration. I can remember each and every one of them like it was yesterday. Each year she is amazed at the cAnDy & cOsTuMeS. It was nice being able to decide what she should be for the first two years of her life but it's also fun to let her decide. This year she picked TiNkErBeLL but not after much ado. First she wanted to be a purple ballerina but she quickly changed her mind after a trip to the Disney store. There she picked a Minnie Mouse costume that we all thought was perfect for her! When we tried on the costume at home it did not fit so she decided right then and there that she was going to be Tinkerbell because Daddy showed her that costume at the store. I told her that she could still be Minnie, we would just have to buy her a bigger dress but her mind was set on Tink.

2005 (6 months old)
"The Little Monster" This was Arielle's first Halloween. I remember rushing home from work (I had just started working since she had been born only a couple weeks prior). I was so anxious to get through out dinner routine so we could take her out Trick or Treating for her first time! Zak and I carried her around the neighborhood even though we knew she couldn't eat the candy they were handing out. She looked so adorable scooting around the floor and I remember we all just smiled and pointed at how cute she was! 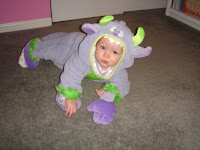 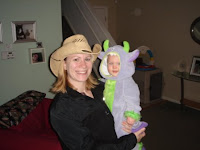 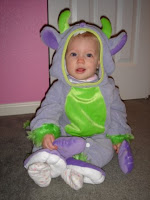 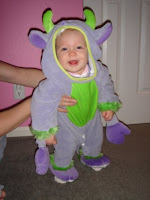