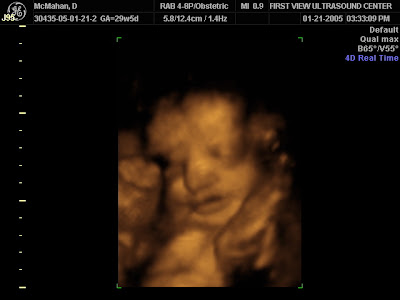 My first born daughter arrived on April 7th, 2005. My due official due date, the date I had been counting down to for nine months, was April 3rd. When my due date came and went with no sign of Arielle showing any interest in dropping down for her arrival my doctor {hesitantly} scheduled an induction. 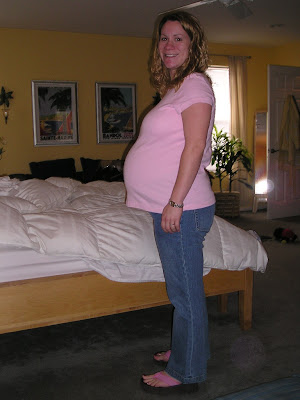 Zak and I headed to the hospital on the evening of April 6th not having any idea of what to expect about when or how our precious little girl would make her appearance. We got settled into our room and shortly after that I got started on my induction meds. I think we watched some television but I don't remember much because they gave my a sleeping pill so I could have my last full night of sleep for a long time to come. From what I remember, I actually did sleep all night and was very comfortable too.
The next morning I started to feel the contractions and requested the epidural. Shortly after they administered it, less than an hour before Arielle's arrival, there was a flurry of activity. The nurse came in to give me an internal exam so she could check on the progress of my dialation but she became very uneasy in an instant. "I think this baby is breach!" she said, to which we replied that we had an ultrasound the night before and that was not the case. I think she might have attempted another internal exam or maybe she just went to get another nurse for a second opinion, I'm not exactly positive but I remember starting to feel uneasy.
When the new nurse arrived and performed her exam she was quite overwhelmed by what happened next. "The baby just sucked on my finger" she said and she told us that she could feel the baby's nose too. I didn't think there was anything wrong with this and thought it was quite cute! However, the nurse explained that this meant that the baby was presenting herself face first instead of head first which is not an ideal position for a natural delivery. They told us that while it wasn't impossible to deliver a baby in this position, it could cause complications and it was a risk that they didn't think was worth taking. Immediately the nurses began prepping me for surgery...an emergency c-section followed very soon after. 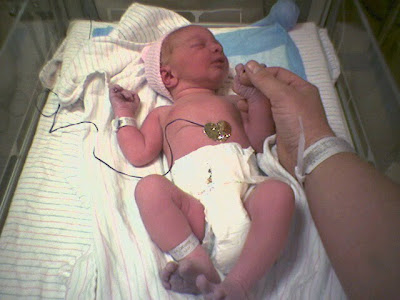 Arielle's first photo taken by Zak on his cell phone camera minutes after she was born.

While I wasn't exactly thrilled about the fact that I wasn't able to deliver Arielle vaginally, I accepted the fact that this was Arielle's birth story and I was happy with the outcome. Arielle turned out to be a healthy, happy baby and I recovered from my surgery within a few short days. Sometimes I wonder how this story would have changed if we had the patience to wait a few more days for Arielle to make her arrival instead of scheduling an induction. But I really believe that everything happens for a reason and I wouldn't change anything about it if I could. 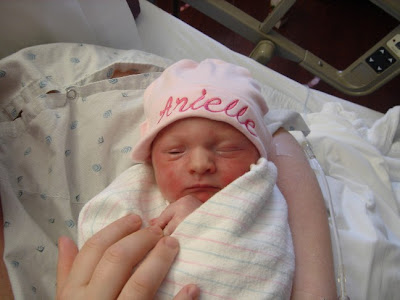 Having said all of that, when I found out that I was pregnant again and my doctor said a VBAC (vaginal birth after c-section) was definitly an option I felt happy to have another chance at a natural birth . I recently learned that there is a 1% chance of major complications arising from a VBAC and only 60% of women are ultimately able to deliver vaginally after a c-section. That pretty much made my decision for me and my life, and the new baby's life, is not worth taking that risk. The only option in my mind is for a planned c-section.
October 2nd, 2009 is the date. This time we both have a pretty good idea of what to expect.

good luck des! it will all work out beautifully!

Best of luck! I'm sure everything will work out great!