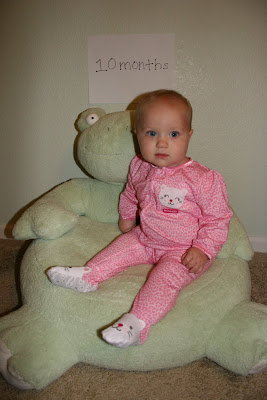 Averi turned 10 months this week. It's really hard to believe that she will be one year old in less than two months. She is still such a happy, content baby and we love her so much! Her personality is a mix of serious, funny, sweet and quick tempered. She has a lot of patience but when she doesn't like something she's not afraid to let you know. Sometimes she is so serious and doesn't show any emotion but other times she is very silly and knows how to make you laugh! Averi is becoming just as much of a talker as her big sister. She babbles on and on most of the time and has added a couple of words to her vocabulary. Of course only we know what she is saying but I'm certain that she says, "DOG", "BALL" and "SISTER". Of course she says "MAMA" and "DADA" much more frequently and usually Mama is associated with when she wants something and Dada is when she is playing around. Averi has been pulling herself up to a sitting position for the past month and she enjoys rolling all around the floor. In the past week she has really started getting up on her hands and knees and rocking but she is not truly crawling yet. 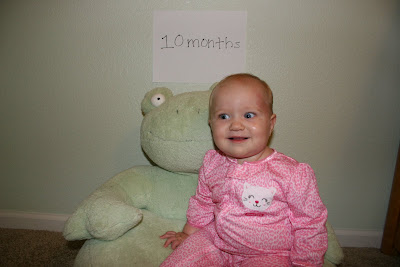 Here are a few more milestones:

-4 teeth (two middle teeth on top and bottom)
-Size 4 diapers
-Size 12 to 18 month clothes
-Bedtime between 7-7:30 pm (she is very good at letting us know when she is ready for bed and also very good at going to sleep right away)
-Wake up at 6 am usually on the dot! There have been a couple of nights that she has woken up in the middle of the night and turned on her fish aquarium but she doesn't cry.
-Sleeps with a receiving blanket
-One of the things she loves the most is to kick and splash at bathtime! One of the things she likes the least is being on the changing table after bathtime.
-Eats almost anything you put in front of her but recently she has decreased her intake and decided that she doesn't like apples.
-Cries whenever Momma is in the same room but not holding her
-Taking one nap a day at school (12-2 pm) but still taking two naps a day on the weekends at home
-Drinking 22 ounces of formula a day (4 bottles)
-We have been supplimenting Iron drops in her bottles for the past month because her levels were low at 9 month check-up
-She loves to snack on Cheerios while we she is sitting in the shopping cart while we are out and about!

It is so fun to see their little personalities come out. She has such a sweet little smile.

so sweet! she is adorable! love those eyes!

you are so lucky to have a good sleeper!

She is soooo sweet! I love all the info you posted- helps me kinda gauge what I might be looking forward to with my (almost) 6 month old. The crying wanting to be held by you when you're in the room must feel like a blessing and a curse!