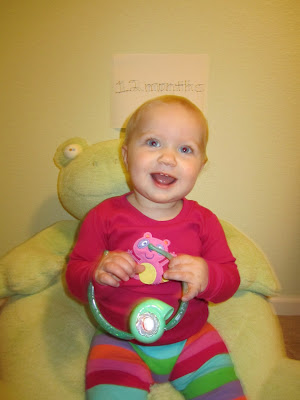 We took her in for her checkup just a few days later and she weighed 23 lbs, 10 ozs.  Her first birthday party was a very fun for her, especially the cake eating part!  A couple of days after that we jetted off to Florida for our annual Siesta Key Beach vacation at Gaby and Tee's.  I can't wait to post pics of both events...

Here are some of her milestones at 12 months:

-Averi is crawling around like crazy and pulling herself up very easily.  She is not showing any signs of walking yet but that is okay by me because I love how she is all baby!

-Still wearing size 18-24 month clothes and size 4 diapers but she has thinned out a lot in the past month.

-She has five teeth and we started brushing them before bed every night.  She loves the toothbrush but I can't get her to close her teeth so I can clean the front of them well enough.

-Averi doesn't say much other than MAMA, DADA and DOG-DOG (I don't know why she says it twice but she always does).  I think she says SISTER too but it's very hard to tell.  She is lot further behind in the language department than Arielle was at this age.

-She shakes her head YES and NO and points to things she wants all the time and says "EH" or "DAT" or "DIS".  She also waves hi and bye and waves at herself with both hands when she wants you to give her something.

-She is off the bottle and only drinks from sippy cups.  She drinks well from open cups at school which is a requirement to move into the one year room (so is walking).  She tolerates cows milk well and loves to drink it!

-Averi got her first ear infection this month probably due to the same crud that she and I have been fighting off for the past couple of months :-(  We found this out the day before Arielle's ear tube and adenoid removal surgery.

-Her hair is getting so long and staying so blonde!  She gets a lot of compliments on her beautiful, big, blue eyes.

-She knows how to kiss now but still most often with her mouth open a little bit.  She gives high fives too!  Another way she likes to show affection is to head-butt!

-Her and Arielle enjoy taking baths together regularly which is great because it saves us a lot of time in the evenings.  Averi is getting used to her sister's ways which most of the time are very sweet and thoughtful but sometimes Arielle gets a little jealous and possessive of her things (naturally) and isn't afraid to let Averi know.  Averi hardly cries when Arielle takes stuff away from her...she just gives her a look like "Whatever crazy girl"!

-Some of her favorite things to do are look at and touch dogs, play with the dishes in the cupboards, empty containers and put everything away, play with her stacking cups, crawl through stuff like tunnels, open and close doors (she'll even close the baby gate whenever someone leaves it open-thank goodness!), crawl as fast as she can into the bathroom so she can stand up at the toilet and tub because she is fascinated by water.

-Some of her dislikes are waiting for her food, when mommy leaves the room and sitting still or sleeping on airplanes (she cried for the entire last hour of the flight home which in retrospect might have been because she has an ear infection but we thought it was because she didn't take a nap-maybe it was both.

-Speaking of water, Averi did have an incident with the bathtub which thankfully did not have water in it.  She leaned over to get a toy out and fell in when mommy wasn't looking.  She cried and had a bump on her forehead but was fine.  Our tub is plastic, not porcelain so it wasn't as bad as it sounds.

-Lastly, Averi had her first trip to the ER while we were in Florida.  The chair that she was strapped into tipped backwards and we thought there was a chance she hit her head on the tile floor (even though there was no physical evidence that she had).  We didn't want to chance it so they did a cat scan and fortunately everything was fine! 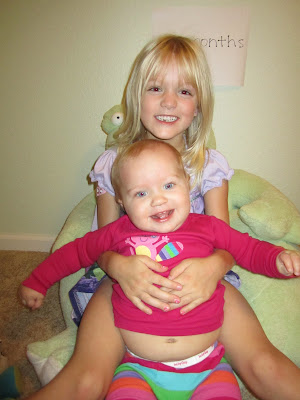 love seeing your sweet girls. they look so happy and healthy!! xoxo