Here are some random acts of funny-ness by Arielle from the past week. 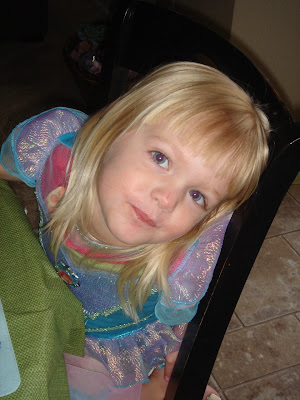 Arielle woke up crying last night at 2:30 am. Of course I immediately thought she was sick and would be burning up with a fever. Happily, she wasn't burning up at all or complaining about any other ailment. In the morning, I asked her if she woke up in the middle of the night because she had a bad dream to which she replied, "I accidentally dreamed about ants." I said, "Ants aren't scary though, are they?" and she said, "They were red ants." Earlier that week we had a discussion about animals that could sting you so that is where she learned about red ants. I thought for sure she was having nightmares about the ghosts and goblins on Scooby Doo, which we let her watch before going to bed. Probably not a good idea but she loves that cartoon!

One day Arielle was playing her harmonica and told me she was making restaurant music. And every time a discussion comes up about the President, she asks me why he can't come to our house to meet us. Last night, she insisted on taking a shower instead of a bath. Seeing how afraid she has always been of showers I was happy to accomodate her request. While she was in the shower she said, "Oh, this is much better today!" She still doesn't like to face the water and has to cover her eyes with a washcloth the entire time but that is still improvment. The best one was when she put her arms under her nightgown and stuck her fists out of her chest then told me she has big boobs!!!


Where does she come up with this stuff?

Isn't it funny what they dream about? I would've thought it was the Scooby Doo cartoon too but nope, their little minds work in such funny ways. I'd love to know how their brain works!

The boob comment was totally something you would say! LOL! Who know...kids are so funny! Hope you're feeling well.