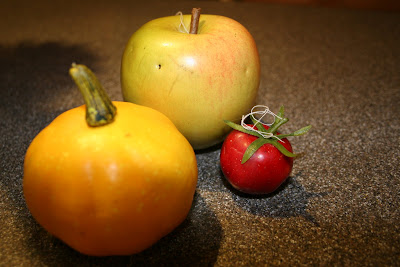 Today Arielle learned a very important lesson. She learned what it means to steal and that it is wrong to steal. When we got home from shopping today I noticed she was playing with some fake decorating fruit. I had no idea where it came from so I asked her where she got it and she replied, "it was in my monkey purse." So I said, where was it before it was in your monkey purse and she told me the furniture store! I couldn't believe it. She had stuffed it in her purse before we left the store and stole it.
I told her that it was wrong to steal but she just looked at me blankly and I realized that she did not know what it means to steal. I scooped her up and held her in my arms and told her that stealing is when you take something that doesn't belong to you or when you take something from the store without paying for it. Then I said that when people steal, the police come to their house and put them in handcuffs then take them to jail, where they will be away from their families for a long time.
She got a very serious and anxious look on her face and got really close to me and said, "when the police come will you tell them that I didn't know it was wrong and then they won't take me away from you because I love you guys." She repeated this a few more times to make sure that I knew what to stay when the police showed up at our house. I guess my explanation of stealing scared her somewhat. Hopefully she learned her lesson.

Wow, that is a hard lesson to learn, but I am glad you were there to teach her! I can remember my sister stealing before she knew it was wrong, and my mom having to deal with that. I am sure it is a pretty common thing to do!

It would be fun to meet you sometime! I am super-close to my due date and my doctor is telling me it could be anytime, so maybe we could work something out for after our new little one is born. I think I will be incapacitated for awhile here!
Carrie