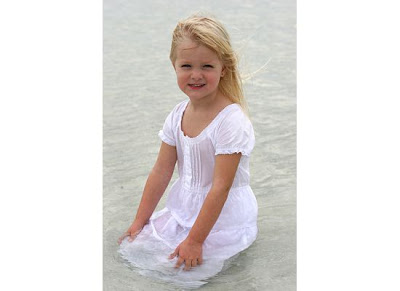 I can't believe how grown up Arielle has become over the past week. It's like all of the sudden she is saying and doing stuff that is so unbabylike {for lack of a better description}. The other day at the store I told her that I just had one more thing to get and then we could go buh-buh's. She told me not to say it like that. Today I called her baby girl at the end of a sentence {it's just a pet name I've always had for her}. She told me she wasn't a baby.

Something else we have been going through this week is bedtime procrastination. Practically every night she has walked out of her bedroom after we tucked her in and said goodnight, sometimes crying. One of the nights she was upset because she could tell we were playing the Wii Fit test and she wanted to watch. We let her stay up late. Another night she had apparently hit her face on her bookshelf/nightstand. Tonight she messed up her covers and needed them fixed then she decided that the sound her humidier makes scares her so we had to turn it off. She has had a humidifier in her room since she was one so I'm not sure why all of the sudden it's an issue.

The older Arielle gets, the more at ease I feel about parenting. It doesn't mean things have gotten easier, it just means I have gotten more comfortable with things the way they are.

Get use to the bedtime procrastination! Imani is a pro at that. She has gotten so much better with bedtime in general, but whenever I say it's time for bedtime, she's always like "one sec."

Arielle is so gorgeous!! I call my daughter baby girl too. I don't know about you but I wish all my kids would stay little forever. I love their little voices and hands and feet and their vocabulary because they can't say all the words correctly. It's a sad day when they start to pronounce a word right.

BTW I love your family room. It's to die for. Simply gorgeous!! Looks like it's straight out of a magazine

Much love from NJ,
Suz