What do all of these words have in common? These are just a few of the things that Arielle has learned at swim lessons this summer. When we got to her first class last month we were happily surprised to see that Mr. Aaron, her instructor from the Parent-Tot swim classes, was now her Level 1 instructor as well. Mr. Aaron worked a lot with us in the toddler class to make sure that Arielle was ready for the next level. I remember how much she and the other toddlers cried when Mr. Aaron would have their parents pass them off to him. It took Arielle a couple of classes to get comfortable with the idea of being in the water with a near stranger but eventually she did it. 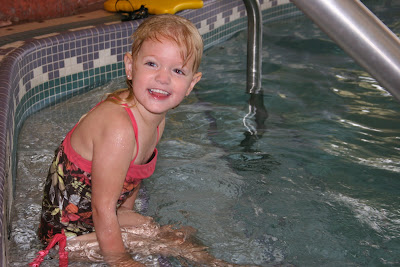 The one thing she didn't ever get comfortable with in her early years was going underwater but that all changed this summer! Bobs, otherwise known as putting your head underwater, have become one of Arielle's favorite things to do while in the pool. The first day of swim lessons she wouldn't do them. Even on the morning before her second lesson she told us she wasn't ready to go underwater but when she got there she went for it and was very proud of herself! Now she does it all the time without hesitation...I am so amazed at her accomplishment! She has also perfected her bubble blowing in the water which she first learned in her toddler classes but it is a very favorite part of the Level 1 classes for all the kids. 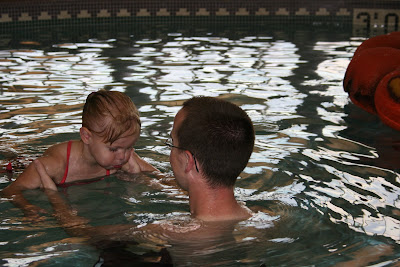 At today's swim lessons the kids were jumping off the side of the pool where the instructor was waiting for them and instead of going leg's first, Arielle did a belly flop both times! It's so cute to see those little kids sitting on the top step of the pool waiting for Mr. Aaron to carry them away for their next lesson. At first I honestly didn't think that Arielle could sit still for that long or pay attention for that amount of time but I was wrong. She is the only one in the class that isn't doing something their not supposed to at any given moment. 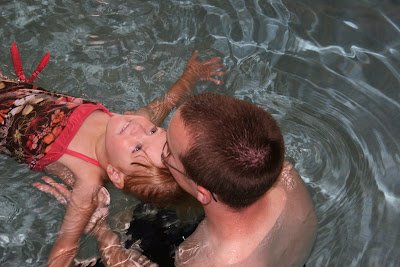 Her improvement shows every day. Just this weekend Arielle was doing the dog paddle in our pool. We are so proud of Arielle and how much she has learned to LOVE the water!
Posted by Desiree at 8:12 PM