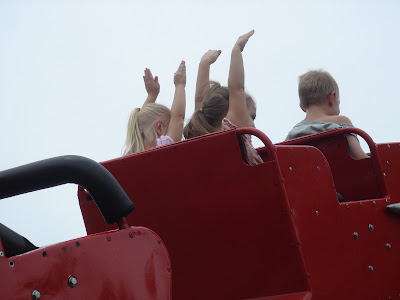 This is the third year in a row that we have had the pleasure of taking Arielle to the Six Flags Elitch Gardens amusement park. Every time has been a lot of fun for all of us but this time was especially memorable because it was the first time Arielle got to ride on the Roller Coaster and Bumper Cars (although we didn't make it on the Ferris Wheel this year which was dissapointing but the line was too long and slow). We ended up being at the park for nearly seven hours...and Arielle was very good pretty much the whole time. It was only just before lunch time that she got crabby but once she ate it was smooth sailing for the rest of the day. 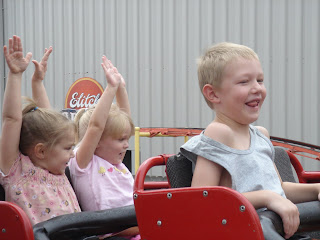 The roller coaster ride to me seemed like it would be very scary for a three year old. They got to go around the track three times and each time the operator would stop them and ask if anyone wanted to get off. I saw some kids that were obviously older than Arielle getting off after the first run but Arielle stayed on for all three runs! Each time she went around I know I saw the look of fear on her face after they went down the first hill but she hung in there and told us how much fun it was and that she wasn't scared. You can see the look I am talking about in one of the pictures if you look close enough. 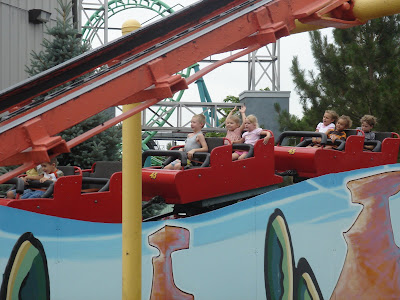 The bumper cars had us rolling with laughter {if only we had brought the video camera and not left the camera in the car when we changed for swimming} and it was so fun to watch Arielle enjoying them! Zak and I both knew that she wouldn't be able to steer because we've seen her in the Barbie Jeep at home and she just doesn't have the ability to steer yet. The operator noticed it too because he kept trying to tell her what to do. All she did was go around and around in circles in her bumper car and every time someone bumped into her she laughed so hard! 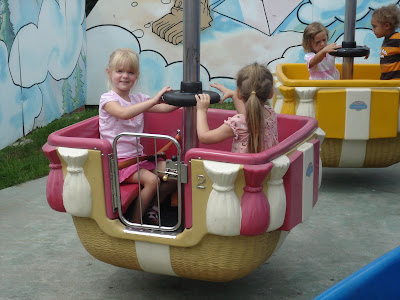 I loved seeing Arielle enjoy all the rides that day; the teacups with Daddy, the kiddy rides all by herself and the water park slides with both of us. It definitely brought back memories from my childhood that I hadn't thought about for several years. What I remember the most was how afraid I was of the roller coaster. It wasn't until my early teen years that I actually got on one and figured out that it was actually fun, not scary. I'm already looking forward to going again next year when she is a little bit older and perhaps tall enough to get on more rides.
Posted by Desiree at 12:03 PM